It’s unclear what features of a business’ Yelp page influences consumer decisions most.

Photos, average rating, and number of ratings are the most influential features.

Yelp is a local-search service powered by crowd-sourced reviews.

This was a project for CSC 486 Human-Computer Interaction Theory and Design.

To determine what features to study with eye-tracking, we ran a preliminary study to surface features that were statistically significant. 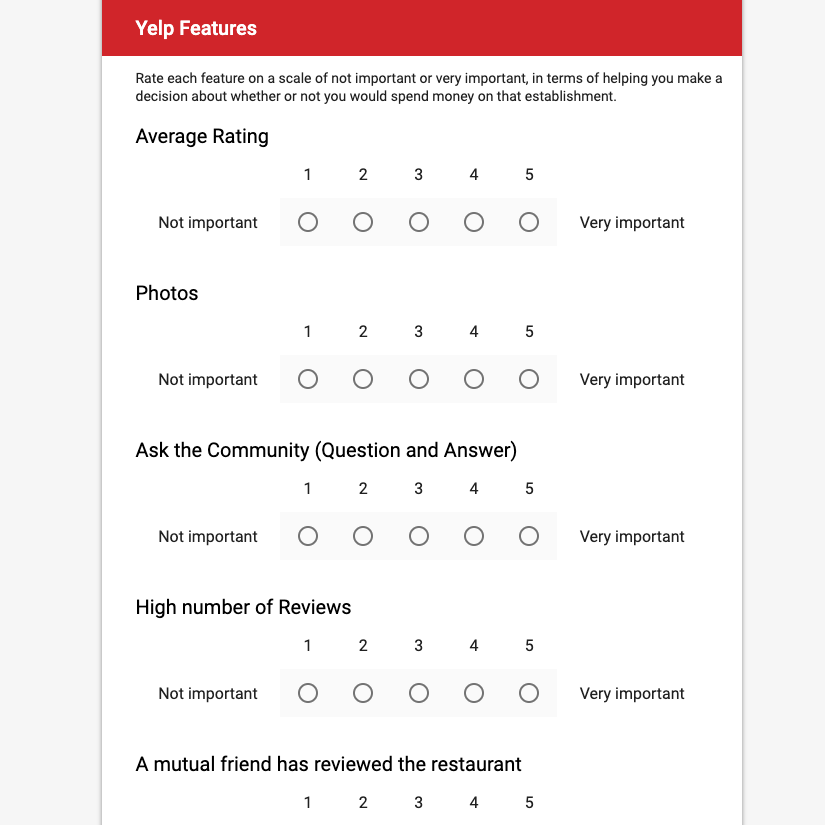 We found that the most important features are:

90% of respondents used Yelp at least once a month

6 participants were presented with 3 sets of 2 businesses' Yelp pages and asked to choose one to patronize.

We tracked their gaze while they compared the pages.

After making a choice, we asked them which features had informed their choice.

Businesses chosen for comparison were far away from the testing location to minimize the likelihood that participants had existing opinions about them.

Each pair of businesses had similar values for each feature, except for the feature being tested.

We chose the top 3 most important features discovered in our preliminary study to test.

Each pair of businesses had similar values for each feature, except for the feature being tested.

We predicted that Option 1 would be chosen since it had the more successful value within each pair.

We compared each participant's choices with (1) the features they reported as influential and (2) their eye-tracking data. We interpreted these results for each of the 3 cases.

Initially, we had hoped to simply measure which features participants looked at (to gauge each feature's influence).

This was ultimately ineffective because no significance was found (i.e. most participants looked at most features).

This made our collection of participant's self-reported influences useful in identifying correlations between their eye-tracking data and choices.

We also explored using the proportion of time each participant looked at a feature, relative to the rest of the page. However, this was also not a good measure due to variation in detail (e.g. it takes longer to read a review than the number of stars).

All participants looked at both review counts.

5 of 6 participants chose the predicted option.

The other participant chose the non-predicted option because they had more authentic looking food in the photos.

All participants looked at both average ratings.

4 of 6 participants chose the predicted option and reported average rating as an influential factor.

The other 2 participants chose the non-predicted option because of opening hours and quality of business interior.

3 of 5 participants looked at both menu availabilities and did not choose the predicted option.

1 of 5 participants chose the predicted option, but they did not look at the menu availabilities. They cited wanting the food.

There was only one case where the participant looked the feature being tested, chose the predicted option, then did not report the feature as influential. They cited quality of the business interior instead.

Iterating on the preliminary study

While photos were ranked fourth most important in the preliminary study, we found that users spend the most time looking at them.

The average rating and number of reviews features, found to be important in the preliminary study, were confirmed by the main study.

The importance of menu availability was not confirmed, possibly because of ambiguous wording. Survey respondents may have misunderstood the menu feature as photos of the menu.

We found that there was no correlation between duration of gaze and the importance of the feature, due to variation in detail (e.g. it takes longer to read a review than the number of stars).